It wasn’t until the second trimester that I finally started feeling better. I got my energy back literally when week 13 hit and I felt like a new person! FINALLY…I could function again. Any other mommas out there that experienced the same? That first trimester exhaustion is no joke.

At week 12 we did our genetic testing and during week 16 we had our gender reveal party. Finding out it was a BABY GIRL was so fun because now we could refer to the baby as “her”. Things seemed a lot more real after finding out the gender because I just felt like we could identify with her immediately.

I started to feel flutters around week 17 but it wasn’t until about week 20 that I started feeling more distinct kicks. I would describe them as little muscle twitches in your low abdomen. This was the best feeling though!! I was so worried about miscarrying and the thing that gave me a peace of mind was my at home heart doppler. We would listen to her heartbeat every day to make sure she was okay! Once I could feel her movement though, I finally stopped worrying about her and knew that movement = reassurance!

At this point my tailbone got so sore!! If I sat in a chair for any extended period of time I would have to get up slowly because I felt like I had a horrible bruise on my tailbone. After a quick google search I realized it’s totally normal. When your hips and pelvic bones start to expand it creates pressure on your tailbone, hence the soreness!

At week 22 we took these maternity photos with Bri Costello (that doubled as our announcement photo) I will cherish forever. My belly really popped and I was actually feeling pregnant. The kicks became stronger and now Kyle could feel them too when putting his hand on my stomach. This was so so special!

At week 24 baby was 1.5 lbs and I had already gained 30. I’m not going to lie, I was really discouraged by this because I had been trying to eat healthy in the second trimester and was working out at least 4x/week. My workouts consisted of walking 2-3 miles on an incline at a pretty good pace and running every third lap. I was also doing some arm circuits and lunges with weights! Around week 26 though it started feeling so weird to run. Every time I ran I felt like I was going to pee! So at this point, I switched to walking only.

Around week 27/28 I started getting bad back pain and knew it was time to find a chiropractor. I saw someone locally here in Dallas for two adjustments and this helped tremendously!! I can’t recommend it enough if you are experiencing back pain during your pregnancy.

Overall, my second trimester was definitely the easiest and most blissful. That’s what they say you should expect, but you never know until you experience it yourself. This post is in no way me complaining, but I want to share my symptoms and various things I experienced during the second trimester incase any of you are looking to relate. Everyone’s experience is different!

The questions I received on Instagram stories will be answered in an upcoming baby Q&A very soon, but if you have any more for me please leave them in the comments below 🙂 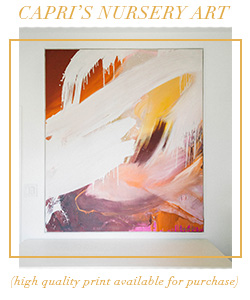